June and the hot summer are the best of friends.  Lakes, rivers, beaches and oceans become the destinations of our summer trips and the many memories we create there. Water contains many hidden secrets, some of those secrets can be dark and scary, others can be quite sweet and charming. This month we will learn about a small animal that hides in the waters of the world and provides us with one of the most beautiful gems. This month we will learn about pearls. 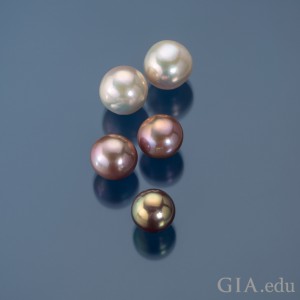 Pearls are one of the few organic gems. They form in oysters or other mollusks; we will explain how pearls are formed a bit later. Pearl obtained its name from the old French word perle, which comes from the Latin word perna or “leg” which was used to describe a kind of sea mollusk. Chinese historians have a written mention of natural pearls in 2206 B.C. Asian elite and European elite used to wear pearls as symbols of wealth and status, but the sources of pearls were limited at the time to Chinese and Japanese rivers, lakes and oceans. When Christopher Columbus began his voyages to the new world, many other sources of natural pearls were found, and the demand for them increased. Natural pearls are categorized into three types: Akoya, South Sea and Tahitian. Each pearl has a unique appeal to them. The overfishing, oil drilling, plastic replicas and the development of cultured pearls led to a decline for natural pearls in the 1900’s.

Cultured pearls began to rise in 1920 after Kokichi Mikimoto developed a safe and efficient manner to help mollusks develop pearls in more quantities and less time. The lack of sources for natural pearls, allowed cultured pearls to grow in the market and to meet the demand for the desires of the gem. Nowaday, pearl culturing can be found in many parts of the world.

Japan has the highest quality Akoya natural pearls known for their beautiful white colors. The South Sea pearls occur from Indonesia all the way down to Australia and are known for being some of the biggest natural pearls in the market. Tahitian pearls are only produced in Tahiti and are known for their beautiful dark colors. China is the largest manufacturer of freshwater cultured pearls. Cultured pearls are also found in South and North America. 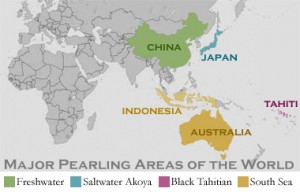 All pearls form from oysters or other mollusks; mollusks are invertebrate animals that compose the phylum Mollusca of invertebrate animals. Some of this animals include snails, octopus, clams, and octopods, but pearls only occur in bivalve oysters (they have two clams.) The process begins when an object enters the mollusk’s body and begins to irritate the soft tissue of the mollusk. In response to this irritation, the mollusks start to coat the irritant with nacre which contains aragonite (a compound of calcium, carbon, and oxygen) and conchiolin (a binding agent, similar to the one found in human hair and nails.) The mollusk begins to put layers of nacre on top of the irritant until a pearl is born.

Cultured pearls use the same idea as the creation of natural pearls. They use a compound similar to nacre called “mother of pearl” this begins the irritation process, and the mollusks start to layer the irritant with nacre. The main difference between a natural pearl and a cultured pearl is that natural pearls do not use human assistance to launch the process of developing a pearl. 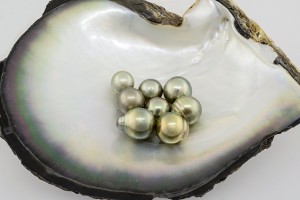 The elegant and simple look of pearls has given them a guaranteed spot in almost any girls jewelry box. Necklaces, earrings, bracelets, rings and even watches are adorned by the beauty and simplicity of pearls. Round pearl is the most popular shape of pearl, but many other shapes attract all kinds of people and can help design some unique and flamboyant pieces.

Pearls also come in many colors other than the traditional white/pink colors that we commonly see. Some of the colors occur naturally, and they can also be treated to acquire a particular color. Nonetheless this mixture of colors and shapes can create extraordinary pieces of jewelry. 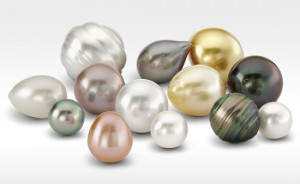 Wear and care of Pearl

Pearl is a 2.5 – 4.5 on the Moh’s scale. The Moh’s scale of mineral hardness characterizes the scratch resistance of various minerals on an exponential scale from 10 to 0. The top of the scale is Diamond at 10 and graphite at 0. Pearls are extremely sensitive to chemicals, everyday heavy wear, and as a rule, when taking jewelry off they should always be the first thing to come off and the last thing to be put on. In the right setting and with the proper care, this gem can look great for decades. 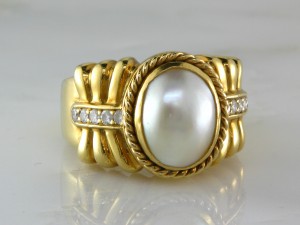 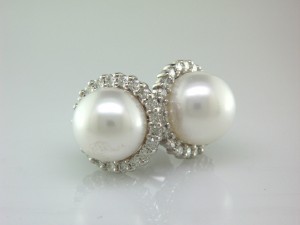 Many people see pearl as a sign of modesty, chastity, and purity. Many people in ancient times believed that pearls were connected to the moon and the tides of the ocean. Water has always been surrounded by mysticism, has been seen as a dominant force to be reckoned with and a life-sustaining part of nature. Pearls could be thought of as hidden little treasures of the water. Next time you are looking for a gift or a new piece of jewelry, do not forget about the beautiful pearl, a representation of the purity of love. It can complement any casual or formal outfit you may wear, and it is  a piece of jewelry that will never go out of fashion.