The attic is calling you to grab your favorite sweater because the cold winds of fall have arrived. Bonfires become a mainstay as we gather with our friends, roast marshmallows and laugh at the stories we share. In the gemological world, November gives us a stone that comes in all the colors of fall. Cool blue hues like the cold winds and vibrant reds and oranges like the colors of the bonfires that we love so much. This month we will take a look at Topaz. 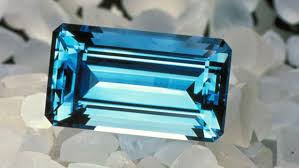 There are two theories as to how topaz obtained its name. Many believe it came from the old Greek name of a small island located in the Red Sea, called Topazios. The island is now called Zabargad, and it has never been a source of topaz, but it once became a known source for peridot. The ancient Greeks used to wear topaz as they believed it would grant them strength. The second theory is that it comes from an old Indian language called Sanskrit. Topaz got its name from the word topas or tapaz, which means fire. For centuries many people in India believed that wearing topaz above the heart assured them a long life, beauty, and intelligence. Which one is correct? Well, we may never know. Topaz acquired a lot of favoritism as a stone of choice for jewelry during the Renaissance period in Europe, as they believed it had the power to dispel anger and block magic spells. During the 19th century, in the Ural Mountains Imperial topaz was discovered (more on this later.) It obtained the name Imperial topaz as it was named to honor the Czar of Russia. Only those of the royal family were allowed to wear the pinkish-orange stone. 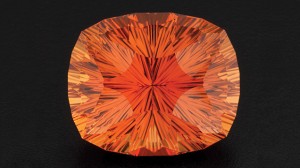 Topaz can be found all around the world ranging from light to dark hues of multiple colors, but  Brazil is the only country with a known deposit of Imperial Topaz. Imperial Topaz is a medium reddish orange to orange-red color; this is the most valuable of all topaz colors. 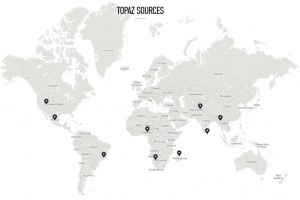 Topaz is an aluminum silicate-containing fluorine. The topaz crystal begins to form, thanks to the fluorine-bearing vapors are given off during the last stages of crystallization of igneous rocks. Topaz is an allochromatic stone; this means that the color topaz obtains from impurity elements or defects in its crystal structure. Unlike most other gemstones that gain their color from their basic chemical composition. An example would be how the trace element chromium produces natural pink, red and violet colors in topaz. Imperfections at the atomic level cause the color to change into a yellow, brown and blue colors. Topaz grows in an elongated fashion, with grooves parallel to their lengths. To take advantage of their growth, oval and pears are the predominant shapes of topaz finalized gems. 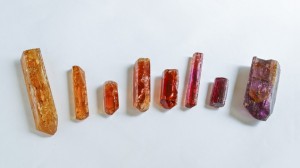 Topaz comes in many colors such as brown, blue, green, yellow, orange, red, pink, purple and colorless. Topaz colors get their names based on the hue they display, and jewelry designers love the pieces they can create with the many colors and shapes topaz offers. Necklaces, pendants, rings, bracelets, and earrings are adorned by topaz. 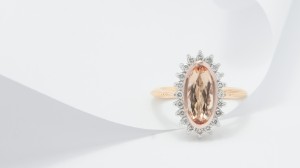 Wear and care of Topaz

Topaz has an 8-8.5 on the Moh’s scale. The Moh’s scale of mineral hardness characterizes the scratch resistance of various minerals on an exponential scale from 10 to 0. The top of the scale is Diamond at 10 and graphite at 0. Due to its good hardness, Topaz is ideal for everyday wear, in the right mounting with the proper protection, Topaz will last a long time. 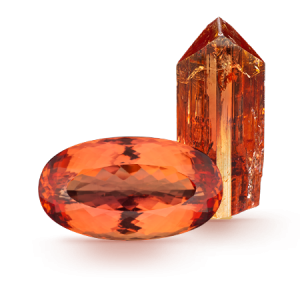 Thanksgiving is one of the best holidays in the year. People travel from all over the world to gather together and share memories that are never forgotten. That feeling of seeing your loved ones gathered around the table to share a meal and tell the stories of their crazy year so far. The color of warmth, the color of comfort, the color of love, the color of adventure, and the color of laughter. All of those colors are part of the many beautiful hues and tones that Topaz offers, would you like to see them up close? Come see us this November and let us show you the wonderful world of color. 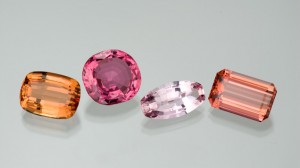