Now that we have learned how to pick out a rough diamond and what makes a standard round brilliant shape, the fun begins! In this blog we will begin to explain the process on how to polish and give shape to a rough stone. However, none of this can happen without the proper tools. Before we begin doing that, it is highly recommended to take facetting classes. Equipment can be expensive and it is a good idea to find some of this classes to help you try different materials and techniques used to facet a gemstone. This blog post is to help us understand the equipment used to perform the gem faceting.

Facet Machine-A device that allows the user to place and polish facets onto a mineral specimen. There are two major components of a faceting machine: The mast/head assembly, and the grinding wheel, or lap. A rough piece of mineral is attached to the head, and through angle, rotation, and height adjustments of the head, the mineral is lowered into contact with the grinding wheel until a facet has been ground. The mast assembly is the heart of the faceting machine. The rest of the machine is simple in construction, including the arbor for the grinding wheel, the motor that runs the arbor, a drip tank, and the controlling switches. These are described below: 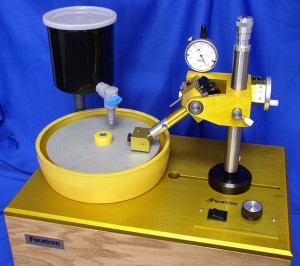 Arbor: Similar to the prong in the middle of a record player that you put a vinyl on, the lap (or grinding wheel) is placed onto it, and the arbor is machined to run perfectly flat when turning. 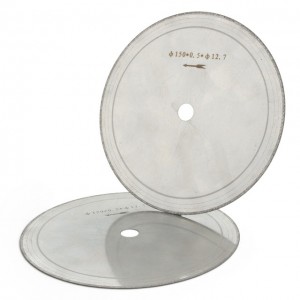 Arbor Nut: The screw that fits through the top of the lap and secures it to the arbor. 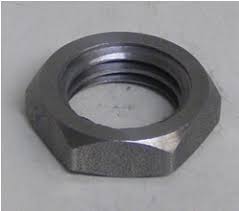 Motor: Typically the motor is housed beneath the machine and is attached by one of several means to the arbor. Motors are always velocity-variable and some can be reversed, i.e. they can turn clockwise as well as counterclockwise. 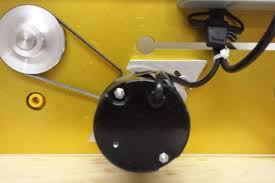 Drip Tank: The drip tank serves two purposes. 1) The friction produced from contact between the rough and the lap creates heat, which can damage the lap and create stress fractures in the stone. The drip tank allows the user to choose a drip rate via spigot and position the spigot over the lap, nearer or farther from the arbor. 2) The dust produced from grinding minerals can cause pulmonary disease if inhaled. The flow of water from the trip tank captures the particles in a slurry, which drains into a rubber container around and below the lap. This container has an exit tube that drains into a second receptacle. 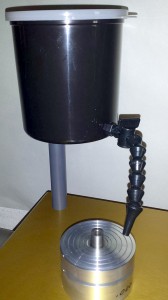 Controls: The controls are generally simple and control the rotational velocity of the lap—the key control—and sometimes the direction of spin. 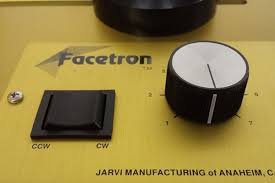 Mast: A vertical pole mounted into the base of the machine on which the assembly is positioned. The pole must be machined with extreme care to ensure its perpendicularity to the lap. This is so that, when the angles for facets are chosen, they are placed at the correct angle. Facets at incorrect angles can mean a gemstone that is lifeless or transparent rather than sparkly. 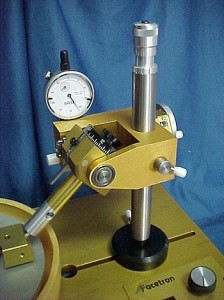 Dop: The piece of rough gemstone is glued or attached with hot wax to the end of a brass or steel rod, known as a “dop” or “dop stick.” The other end of the dop is placed into the quill of the faceting head. The exposed piece of rough usually becomes the bottom of the stone, known as the pavilion. Once the pavilion is faceted and polished, a jig is used to attach the pavilion to another dop, and the rough side of the stone is freed from its dop. This rough side will now become the top of the stone, or the crown. 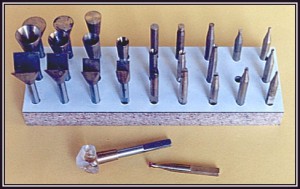 Quill: The dop is inserted into the quill, which is lowered toward the lap to place a facet. The quill is the part of the machine that is held in the hand during faceting. The other end of the quill is attached to the main head of the assembly. 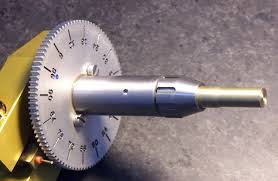 Index Wheel: If you view a gemstone from the top, you will see it has some type of symmetry. Most most round brilliant stones will have eightfold symmetry; emerald cuts have two or fourfold. In order to cut facets around a stone, the quill must be rotated around its long axis. The index wheel is what allows this to be done in a repeatable, accurate manner. For example, the index wheel may have 64 teeth. If a round stone with eightfold symmetry is being cut, the index will be set at 0, 8, 16, 24, 32, 40, 48 and 56 for each of the main facets around the stone. If a square stone is being cut, only 0, 16, 32 and 48 would be used. 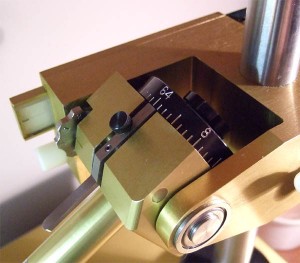 Angle Adjustment: Faceting machines differ greatly in the mechanism for setting the angle of the facet. Essentially, the angle is set and the quill will then lower to exactly that angle before physically being stopped or otherwise indicating arrival at the desired angle. 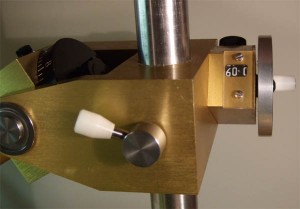 Height Adjustment: The depth of a facet is determined by how high or low the head assembly is, relative to the lap. The way this is determined is by choosing an angle, lowering the quill (with dop inserted) to that angle, and then observing whether and how deeply the piece of rough is contacting the lap. Generally the first adjustment will set the rough just touching the lap, so that a very shallow facet will be placed. The head can then be lowered by a micro-adjustment and the facet can be cut and re-cut until it is of a desired depth. Many machines allow the head to be untightened from the mast and slid up and down for gross adjustments, and then have a separate mechanism for making fine adjustments up and down. 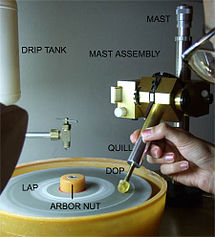 In the next installment of this blog series, we will begin to explain and look at the cutting process.